I WAS THERE... - Thunder Road Motorcycles

Chris Moss has been testing bikes for well over 20 years and in 1999, as a road tester for MCN, attended the launch of the original Hayabusa, a bike that was forming a reputation well before anyone had ridden it, and a launch and riding experience he won’t forget.

As part of the test team for MCN back at the end of the 90s, attending press launches was a regular experience for me. But even though I got the chance to try a hell of a lot of really special new models ahead of the vast majority of people, if I’m honest I was getting a bit blasé about many of them. Getting the chance to ride Suzuki’s new Hayabusa though, well, that was a very different story. The superfast-looking 1300 looked like it could well be the first production bike to crack 200mph, and I got excited about that long before I even got on the bike.

To be honest, the more I thought about things, the more I reckoned it was brave of Suzuki to even consider, let along build such a speed machine. In those days, high speed was becoming very non-PC in the UK. But I, personally, was glad Suzuki carried on. I preferred to see the bigger picture; inappropriate speed was the real culprit, and in the same way you can avoid getting into big trouble with a lot of other stuff as long as your consumption’s more disciplined, I expected the Hayabusa would be safe enough as long as you used your loaf when you rode it. 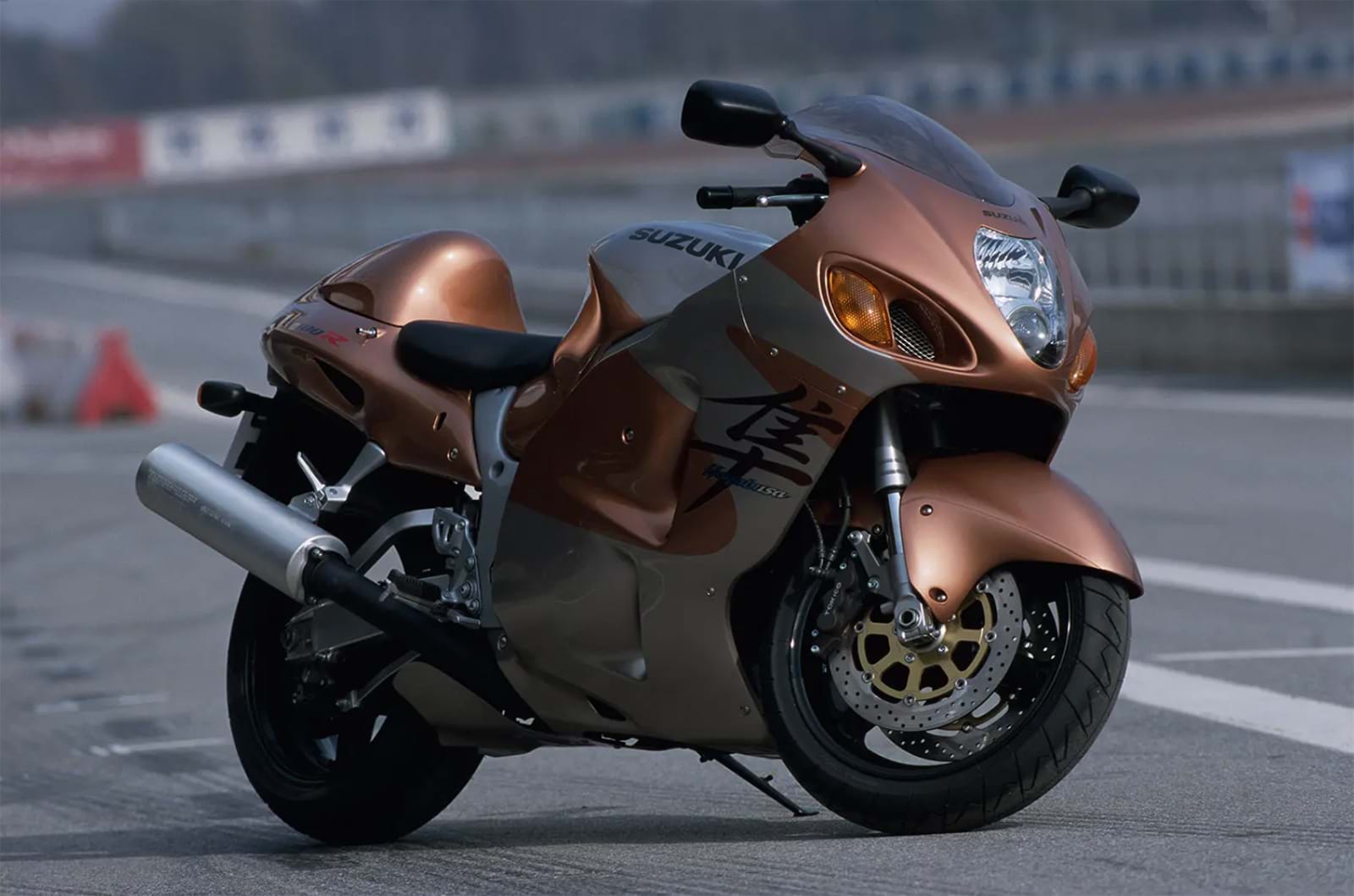 I was riding around Europe on a much more sedate Honda Pan European tourer during the lead up to the Hayabusa launch, scheduled to be held in Barcelona, Spain. By the time I arrived at the hotel the day before it all started, I was really fired up. When I looked at the bike’s press kit in a bit more detail, the keenness went up a few notches further. I learned it had been designed to slip through the air just like the speedy ‘Hayabusa’ peregrine falcon the bike was named after. It was clear the Japanese engineers had spent a lot of time and effort in the wind tunnel to get the aerodynamics spot on. With nigh-on 175bhp available from the engine, it was also obvious they’d paid a lot of attention to that too. Tomorrow, it seemed, was going to be a bit of a day. As we were going to test the Hayabusa around the Catalunya GP track first, my Christmas Eve levels of anticipation meant I didn’t sleep well that night.

When I got to the circuit, I have to admit the ‘Busa seemed a pretty big and weighty looking thing, and its fairly bulbous slippery shape arguably stopped it being described as beautiful. However, the moment I opened the throttle seriously for the first time at the Spanish track I completely fell in love with it. There is absolutely nothing quite as seductive as super strong acceleration, and on this rocket, the exponential increase in speed was staggering. It may well be 20 years now since I first felt that incredible rush, but as I write this I can still vividly recall just how totally thrilling it felt. 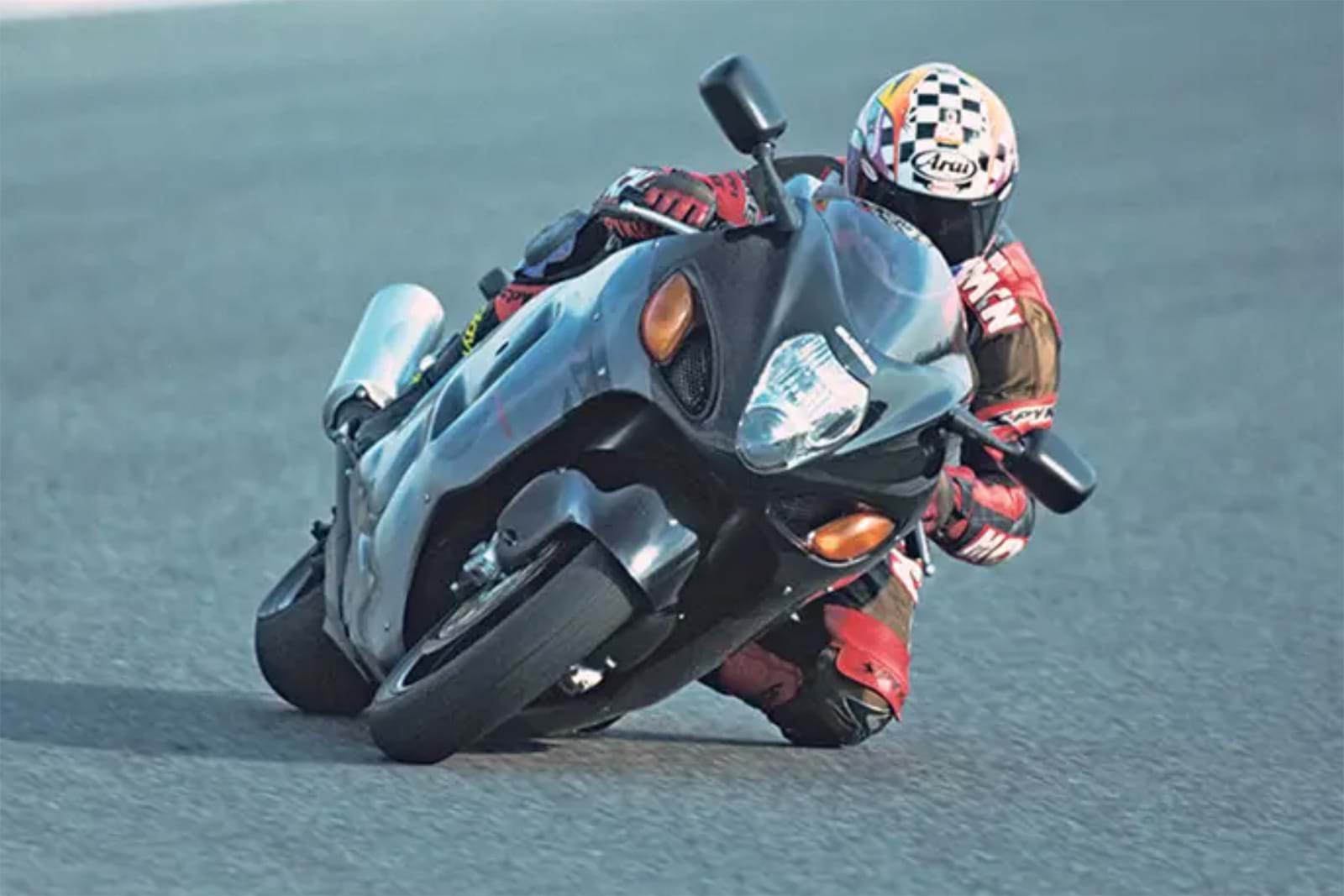 After a couple of sessions, I was invited to join the Men and Motors team who were there to film the event, finding it all too easy to froth with huge enthusiasm when asked how I’d felt riding the bike. One line I clearly remember delivering passionately was, ‘even at this circuit where the lack of reference points can normally fully disguise speed, the Hayabusa feels so, so fast!” Going on to rate the chassis highly too, no one could deny I’d loved lapping Catalunya.

The fulfillment then continued as we left the track to sample the Suzuki on the road. Just as I’d expected, appreciating the magnitude of its massive performance was even easier. Better still though, was the ability to manage all that potency so effectively. Huge power, capable of raising speed so much and so effortlessly, is a feature the Hayabusa may well have had in abundance. However, control of it all was just as impressive. Thanks to the engine power being delivered so beautifully and in such a linear and predictable fashion, metering out just how much performance was appropriate couldn’t have been much more straightforward. The Suzuki may well have possessed what could have been so easily interpreted as outrageous and excessive levels of power, but thanks to how well it was delivered, it actually had to be viewed as incredibly friendly. It’s a bike that allows the rider to dictate affairs, rather than the other way round. 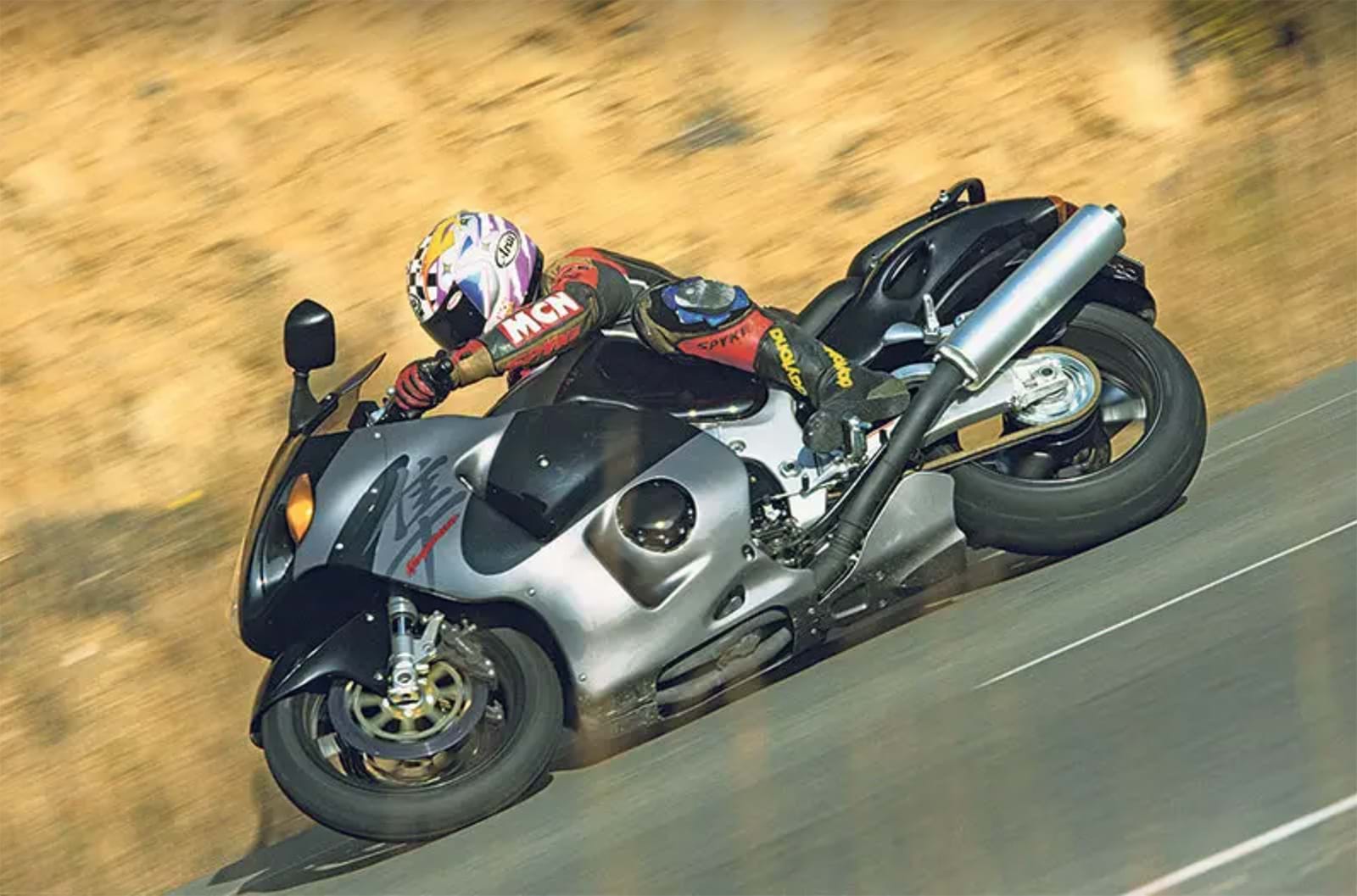 Let’s not kid ourselves here, without the necessary amount of self-restraint, it would be all to easy to get into hotter water on the Hayabusa than you might feel comfortable with. But thanks to its hugely impressive well-mannered nature and overall balance, avoiding a scalding wasn’t the challenge you might expect. This is by no means a monster of a motorcycle, and didn’t warrant being feared. Unfortunately, as all good times always seem to, the incredible experience came to an end before I wanted. Leaving Spain the following day on the Honda tourer felt very ordinary by comparison. However only a couple of weeks later I got to relive my extraordinary experience when I was invited to talk about the Hayabusa with Radio 2 presenter Johnnie Walker. He’s a bike fan, had read my piece in MCN, and commented on his show about how impressed he was about how well-balanced and maturely we’d presented the story of the superfast bike in the paper. We got in touch with his team and arranged a live phone-in interview, and once more I got the chance to gush with praise about the incredible first day on a Hayabusa.

The heady recollections have never ended really, and just as writing this experience is proving right now, they’ve provided an unforgettable legacy. Helping extend the memories still more have been every subsequent, and always sensational rides on Hayabusas I enjoyed since. There have been numerous outings in all, yet the thrill of sampling the Suzuki’s astounding speed is something that’s never really subsided. I got the opportunity to sample all the virtues of the bike once again around just nine months ago, and one of the many things I enjoyed that day in 2019 was the recollection of that original experience back in 1999. That very special time in Spain is something that won’t ever leave my mind.