Yes, you read that correctly – ‘Hasty Flaming Buffalo’ – the winner of the Project Scout Bobber contest, that’s been run across the Benelux countries this year.

Yes, you read that correctly – ‘Hasty Flaming Buffalo’ – the winner of the Project Scout Bobber contest, that’s been run across the Benelux countries this year.

Announced at the Bigtwin Bikeshow and Expo this month, ‘Hasty Flaming Buffalo’, by Dutch designer Luuc Muis of LM Creations, is a beautifully elegant blend of modern technology and the classic lines of a 1910 Indian board-track racer. 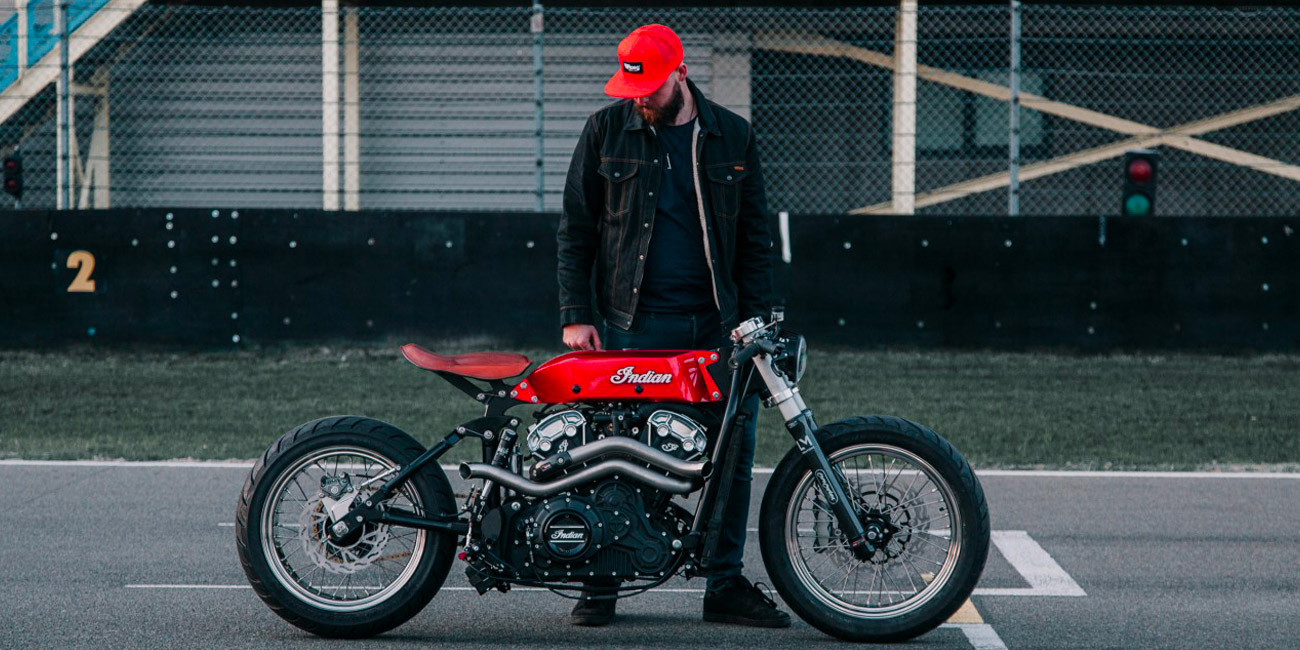 Announced as the winner in the middle of June, Luuc had just 20 weeks to turn his design into reality for the November 1st unveiling, the opening day of the BigTwin Expo. With just the engine and axles retained from the original Scout Bobber, completing the build alongside working his normal day job meant many late nights to stay on schedule.

Blending his 2D design with a 3D scan of the Scout Bobber engine to refine his frame design, Luuc constructed the frame from aluminium tubing and parts machined in aluminium by Scheffers Engineering in Norway. The gorgeous handmade tank also forms part of the frame and houses the airbox and electronic components to achieve the clean minimalist look inspired by the early Indian Motorcycle board track racers.
Luuc was able to attract great partners to the project and Hasty Flaming Buffalo benefits from exceptional bespoke parts including:

“When we first saw the entries for this contest, we knew that the jury was going to have a very hard time choosing just three finalists to go to the public vote,” says Lynda Provoost, Marketing Manager Indian Motorcycle Benelux. “The creativity that went into all of the entries was outstanding, and I think you can see from Luuc’s winning build that the Benelux is a force to be reckoned with in the world of custom motorcycles. To take a Scout Bobber and transform it to such a high standard into beautiful tribute to the heritage of Indian Motorcycle and the early riders of motorcycle sport has exceeded our hopes for this contest.”

‘Hasty Flaming Buffalo’ will make its next public appearances at Custombike in Bad Salzuflen (December 5-7), the Autosalon in Belgium (January 10-19) and Motorbeurs Utrecht in the Netherlands (February 20-23).

For more information on the Scout Bobber that Hasty Flaming Buffalo started life as, click here